“The Ritual” draws inspiration from both “The Blair Witch Project” and “The Wicker” and still manages to find its own voice.


Five guys meet in a pub to plan their “stud” vacation. They finally decide to travel to Sweden and do some hiking. On the same night, one of them is brutally killed in a liquor store. His friends decide to commemorate him by embarking on that very journey they have planned together. Once they reach the Swedish mountains, strange things begin to happen there.

At first glance, “The Ritual” looks like an ordinary slasher with a supernatural twist up its sleeve. There’s a bunch of guys, lost in a creepy forest, with a mysterious creature spraying havoc. The moment the group notices the disturbing, occult carvings on the trees, we – the audience – realize where this is going.

On one hand, the director of “The Ritual” does follow a path, which is common for most of the horror flicks.

Bruckner utilizes an eerie sound design, as well as throws in a few jump scares. He also takes his time to reveal the creature, just like many other filmmakers did. Therefore it’s true, that “The Ritual” often plays the ordinary tunes of the genre. 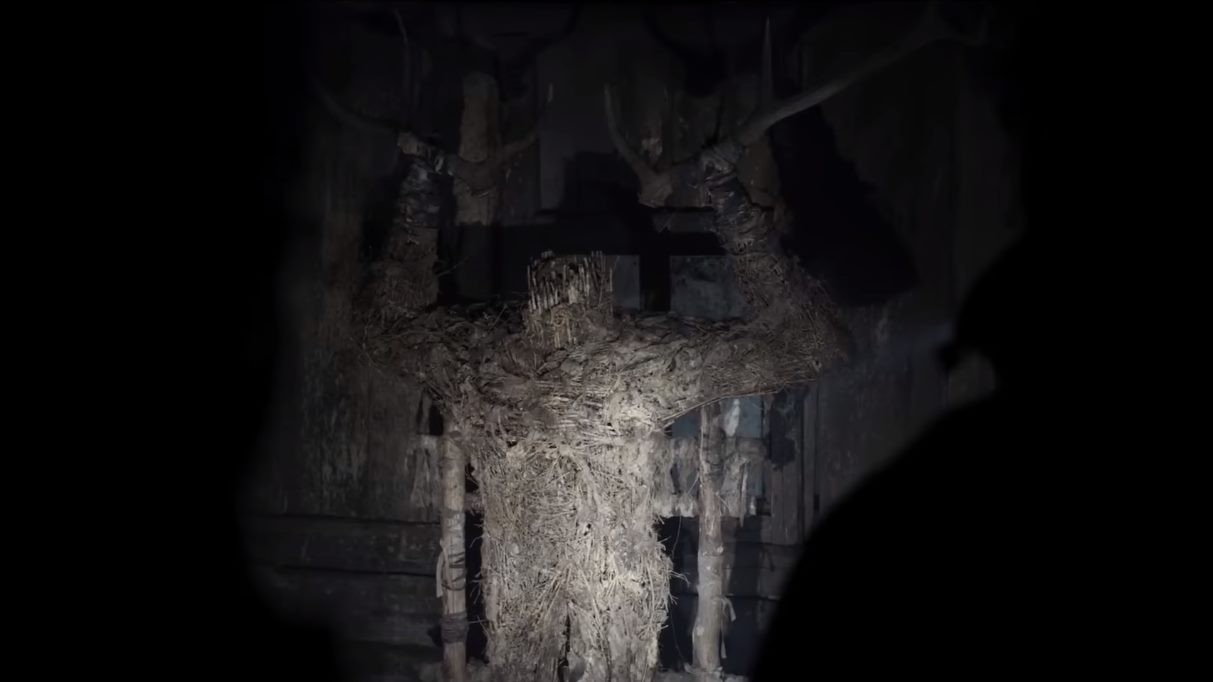 However, the novelty comes from the arch of the main character.

Unlike many other horrors, Bruckner’s film clings on to the trauma of its protagonist. Luke (Rafe Spall) is the only one in the group, who had witnessed the cold-blooded murder of his friend. That sight has haunted him ever since. Such a simple idea for a character gives “The Ritual” a believable meaning. Luke makes amends to his dead friend by becoming the strongest wolf in the pack. He protects them in a way he could not protect him. Hence, Bruckner’s film – apart from a horror movie – sails the waters of a psychological drama too.

“The Ritual” deserves praise for its monster design too. It’s spookiness is foreshadowed by a wooden sculpture, that the four hikers see in a shack. As stated before, David Bruckner is not in a hurry to show his cute puppy early in the film. A surreal monster from “The Ritual”, plucked from a painting by Salvador Dali, is revealed only in the very end of the film. Prior to that, we see it hunting its preys with the incredible agility and swiftness. The woodland, mystic creation takes a form an incredibly designed, ancient predator, with horns, hands and glowing eyes. Consider it a proof that monster movies are not necessarily cheesy.

If there’s anything I’d complain about is that “The Ritual” could have dug more into the occultism area. There was a great premise in the film, as it could execute a different take on “The Wicker” or “The Blair Witch Project”. It only gives a hint in that direction, just like the infamous tapes from “True Detective”. But while the cop drama wasn’t particularly keen on scaring you lethally, Bruckner could implement a bit more of the religious brainwashing.

All things considered, “The Ritual” was a pleasure surprise. It’s a small-budget horror, but the director David Bruckner was not constrained to have some fun. It also established a second dimension to the story, which is definitely a rarity in the horror genre. Even if the film seemed to be a bit of scratching-the-surface or repetitive genre-wise, “The Ritual” holds a noble place among the best horrors of the year so far.

The text was updated after the second viewing on November 15th.