This franchise should have never been brought back from the dead, just like the dinosaurs appearing in the film.

“Jurassic World: Fallen Kingdom” takes things right where “Jurassic World” from 2015 has left them. In other words, Bryce Dallas Howard and Chris Pratt are back on the island inhabited by the brought-back-from-dead dinosaurs. After the collapse of the amusement park (which took place in the first instalment of the new series), the creatures wander freely on the island and constitute a massive problem – what can you do with hundreds of deadly predators in a modern world?

If we have re-modeled Alfred Hitchcock’s famous theory on a film structure, we could say that it should begin with a big joke and carry on until it becomes a laughing stock. It’s hard to find words to describe how big a failure “Jurassic World: Fallen Kingdom” is, but let me try. 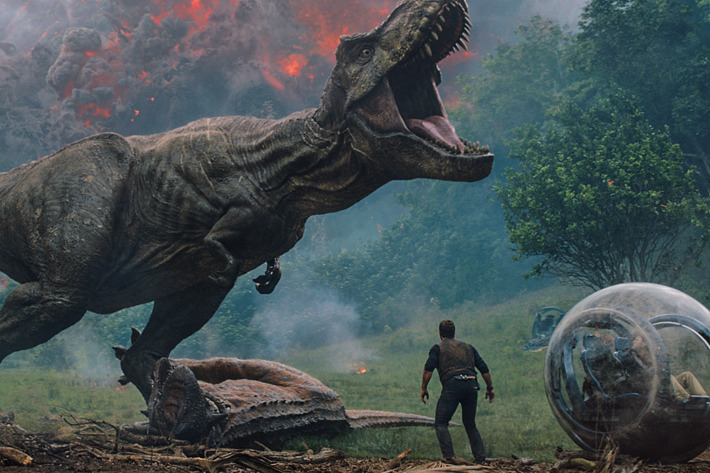 Let’s begin with the story, because it’s at the heart of every, genuinely excellent movie. “Jurassic World: Fallen Kingdom” brings the well-established characters to the island to help in transporting them to a safer place. They are recruited by a mysterious, slimy guy with a British accent. For somewhat odd reasons, everyone is trying to kill them off (apart from the dinosaurs) Then, there is a bunch of other shamelessly crappy ideas cramped into the 2-hours long spectacle. Fortunately enough, Dallas Bryce Howard is not running around in high heels.

The point is that this script barely makes sense. The film opens with Jeff Goldblum’s character explaining the changes we are witnessing, as he is called as a witness in a court session (whose case is it – nobody knows). Few minutes later, we get to see an organisation formed to figth for the rights of the dinosaurs, as well as sad dinosaurs dying and a whole lot of utter crap about environmental consciousness transmitted on a meta level. This green brainwashing stops eventually, because “Jurassic World: Fallen Kingdom” shifts into an ordinary, predictable blockbuster. There is a “captain obvious” bad guy (a waste of the talented Rare Spall), whose evil plan is – you couldn’t guess it – making a profit of the dinosaurs.

On the bright side, the actors seem to have fun on set. There is undeniable chemistry between Howard and Pratt, even though Howard’s character reaches peaks of self-pretentiousness several times. Pratt is literally Starlord saving dinosaurs – It’s Peter Quill from “Guardians Of The Galaxy”, only without the galaxy and his crew. Rafe Spall, the extravagant and greedy bad guy, is joyful too, bringing freshness into a dull reboot of everything we’ve already seen in the franchise.

The soundtrack is also depressingly off. There is not a single moment when Michael Giacchino’s music is not telling you precisely what you should feel. The excess of the soundtrack is overwhelming, and it also deepens the overall impression. “Jurassic World: Fallen Kingdom” is a sad money heist, which uses the once-incredible film as a rag to wash the floor. It’s summer, the glorious time for silly blockbusters and a lot can be forgiven. There are limits to that though. Limits like leaving the goddamn dinosaurs alone.