Casey Killoran, who recently starred and produced an indie drama “Viral Beauty”, chatted with me about the phenomenon of social media, the creative process behind her film and… how Lana Del Rey helped her in shaping her role.

Just to be fair – there are spoilers below!

Cultural Hater: We live in very weird times. As one of the appearing “spectators” comments, we are more interested in a private life of a wannabee-celebrity. Was there any particular situation that pushed you to produce and star in “Viral Beauty”? Or was it a project that was in your head for some time now?

Casey: I lived very briefly with Elizabeth Lam, the writer of “Viral Beauty”. I was heavier at the time. Initially, she wrote a short film about an overweight average girl who suddenly turns into a starlet. The focus of the story was how to navigate oneself among criticism, deal with people constantly throwing curveballs at you. She was overweight, so that’s how people judged her.

Elizabeth took some time and turned this short film into a complete feature. During that time I lost a bunch of weight. She wanted me to produce and act in the film initially. I helped with cast and choosing the right people to work with. And then David (David Lam, the director of “Viral Beauty”) said that maybe I could gain some weight. That’s how it all started. 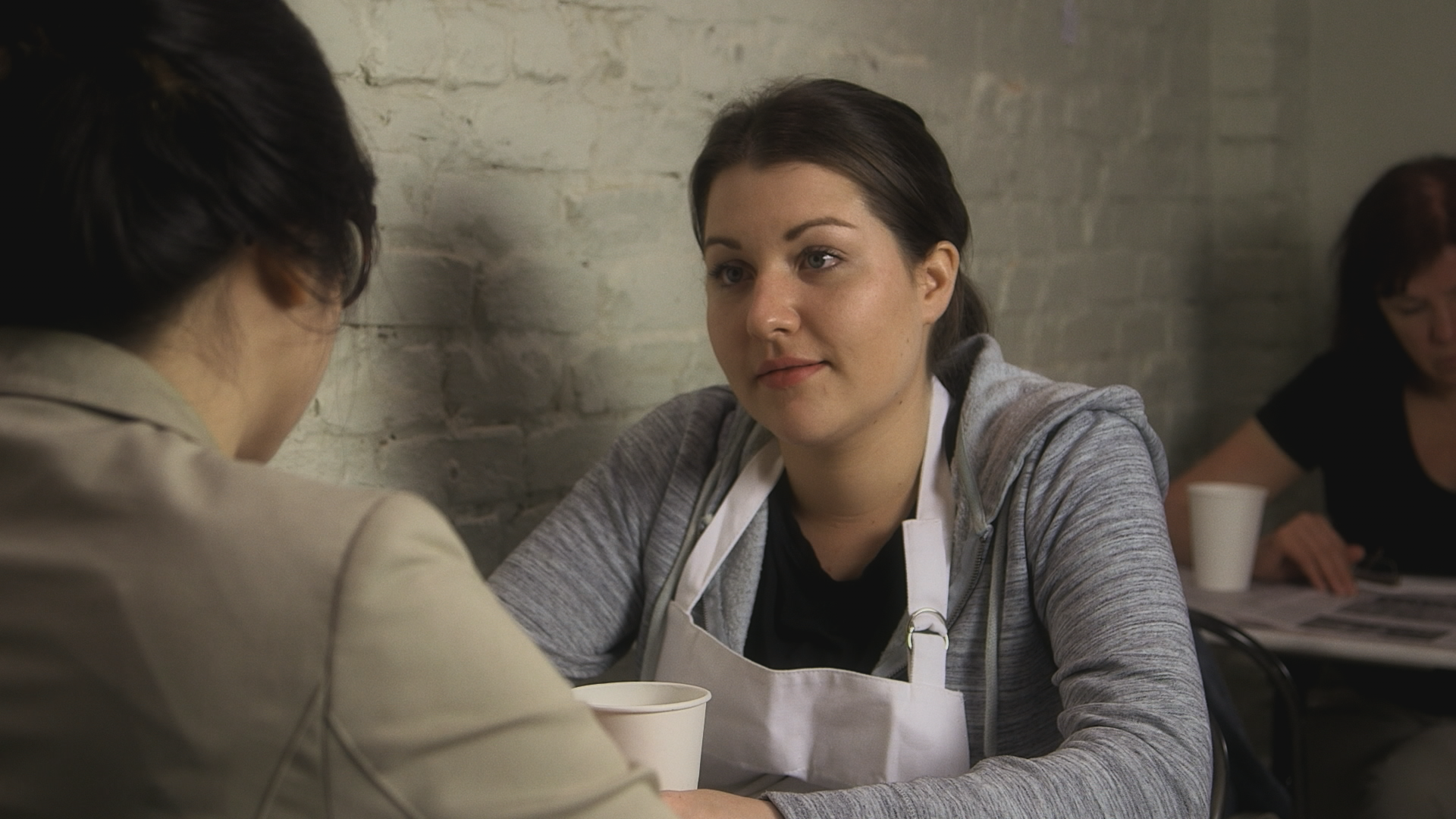 Casey: First and foremost, I had to gain a lot of weight (laughs). I tried to find a different stereotype – I asked David if we can change Marsha’s problem with being overweight. We didn’t find anything as strong so I was supposed to gain 15 pounds. I did that, came on set and heard – that’s not enough, can you gain 15 more? I basically had to keep gaining weight until I looked the the part.

The funny thing is that I quickly started noticing how people changed the way they treated me. For example, some of them stopped opening doors for me. It’s a detail, but you start noticing them again.

Cultural Hater: What about the “tech side” of the preparation?

Casey: I did a lot more time online. Youtube, used social media more, realizing the whole business behind it. When I found management companies, jargon, immersed myself into research. I knew how to talk about that world.

I decided to spend much more time online. I watched videos on Youtube to understand the ins and outs of the whole business around it. I found out about management companies that work in that social media industry, I learnt the jargon. I basically immersed myself in the online world. in order to be able to portray that in “Viral Beauty”. 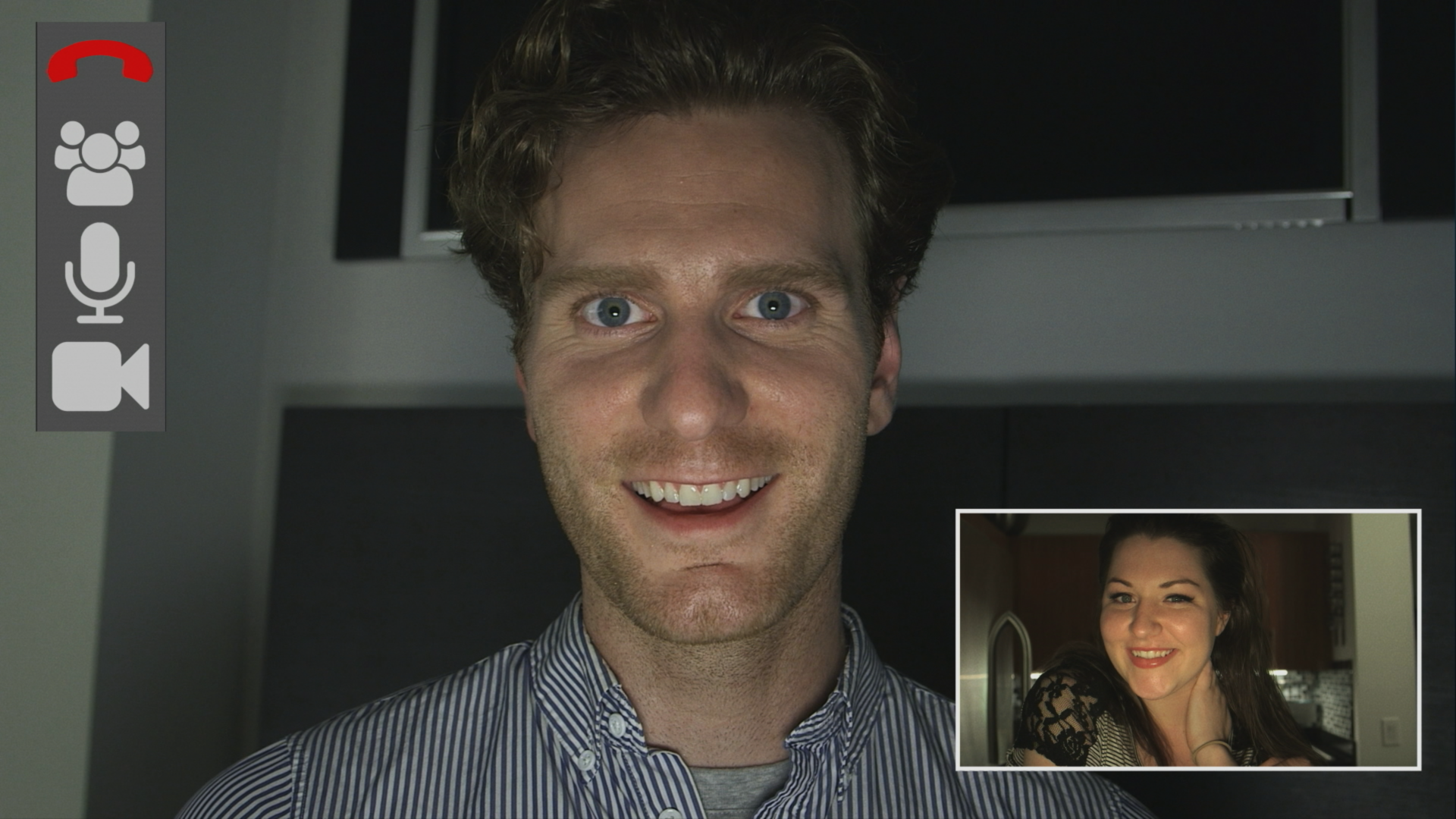 Cultural Hater: “Viral Beauty” uses a lot of “modern filmmaking” (If I can call it that way). The desktop shots, the bits reminding of Snapchat, the Youtube videos here and there. Could you explain the intentions behind these solutions? Do you think that more movies will follow the same path (as this year’s “Searching” does for example)?

Casey: We started working on the film 4 years ago. I will be honest with you -In the beginning I haven’t seen many movies with these kind of tech ideas. One that was an early approach towards that sort of filmmaking was probably “Matrix”. More recently was the horror “Unfriended”, which has shown true possibilities of that “desktop storytelling”. The movie never comes out to the real world, as if the online was all there is.

In terms of “Viral Beauty”, I think I was always married to the marriage of the traditional cinematic storytelling with modern concepts. Our process was also very intricate. Our cinematographer, Edna Luise Biesold, studied each lens to get the specifics. As you say, these Snapchat and social media formats were all shot with cameras, but the aspect ratios and aesthetics had to be changed and adjusted.

Nowadays people use these modern ideas and incorporate them as a part of the artistic flow. I think that there is a general trend of using multi media devices in a cinematic kind of way. In my opinion it’s successful and in the case of “Viral Beauty” these tricks helped us to balance the pace of the film.

Casey: When we were in the editing room, early in the process, we saw that the film was slow. Too slow for the topics we covered. [So we decided to add] These various “tech” concepts helped us make the story fit better into the frame.

I think that there is more stories to be told like that. These social media apps are our everyday bread. Even when we talk, we develop relationships through tech devices. It’s insane. We are so used to them, as a generation. And the generations after us are native because they are raised with these technological things. So there will be a whole bunch of new angles in cinema. A new frontier of cinema. I’m really excited to see it.

“In terms of “Viral Beauty”, I think I was always married to the marriage of the traditional cinematic storytelling with modern concepts.” 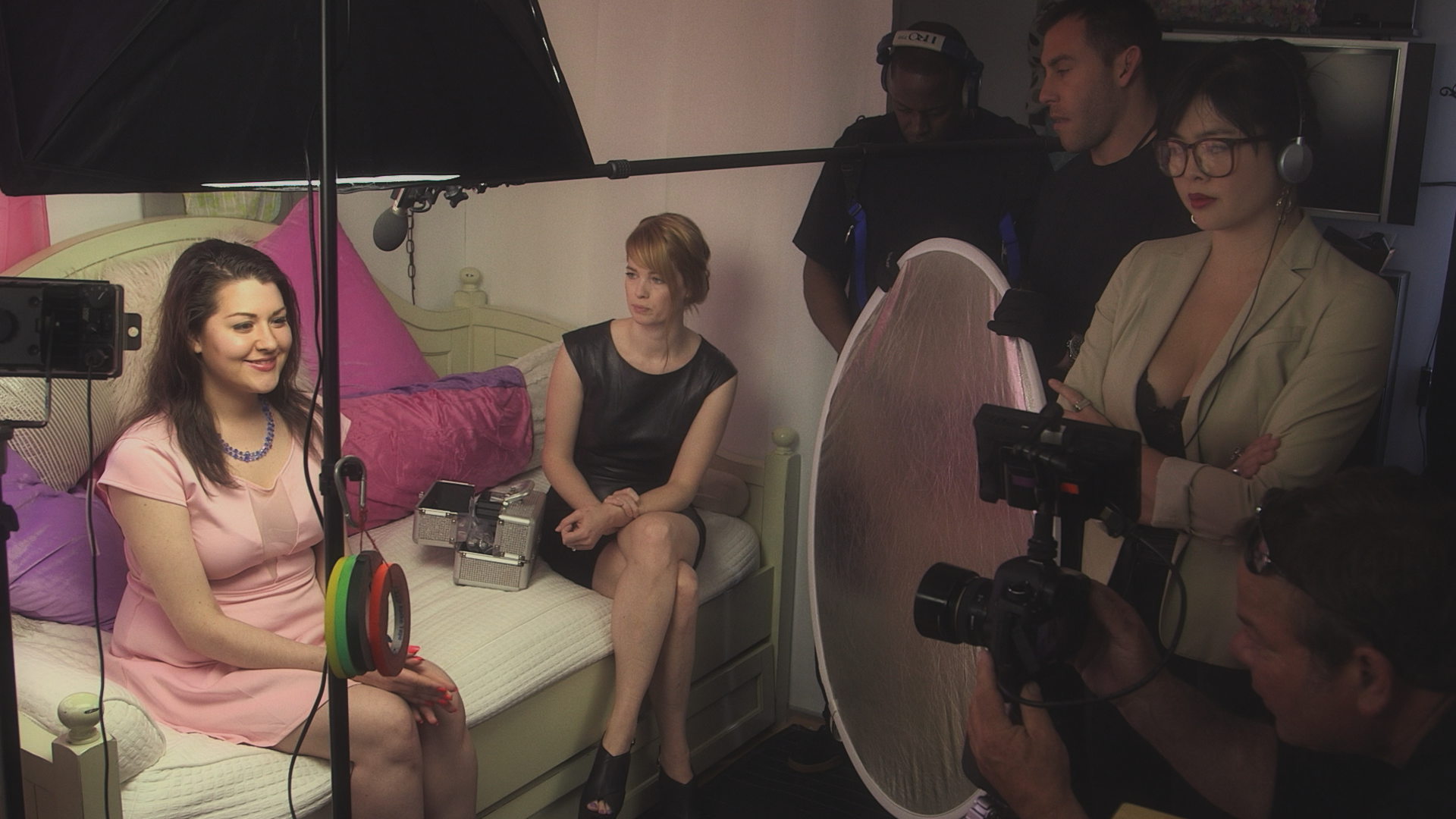 Cultural Hater: We’ve already seen plenty of people like Marsha. They do something ridiculous, something that polarizes others. However, their “careers” are over pretty soon. By the end, Marsha appears to be desperate to stay in the spotlight though. How would you see Marsha’s future, after what we see in the film?

Casey: When I first saw the script, there were different endings. And my initial reaction to this draft was – that wouldn’t happen! Then I started thinking about it. I remember that one day I was watching a daytime talk show, some celebrity gossip was on. You know, the kind of Kardashians’ drama. So these people plan their whole lives, weddings and all of that is down to their PR guys, who cultivate these careers, even including a baby.

We also have that idea in “Viral Beauty”. Tara, the manager that works with Marsha, offers her that crazy deal with getting back together with Will and so on. It’s ridiculous, but I think it’s a kind of cautionary tale. I don’t really think that this ending is so absurd. Marsha wants to sign over her life. We all voluntarily document our life on social media the entire time. Marsha is tenacious, well-driven – she knows what she wants from her future. Therefore, she’s ready to sacrifice a lot too.

Cultural Hater: Which is basically her will to make decisions.

Casey: Yes. There is this part when she goes back to Staten Island, to her previous life. Working in a cafe, back to routine. And she can’t stand it. Our generations is fascinated with being famous. It’s one of the changes that I think we’ve seen over the last decades. Talent used to be important, people needed it to get famous. Nowadays, you don’t need that. All you need is to be hot. Nobody wants any kind of craft, the world wants fame. “What’s gonna get me the most clicks”.

I think that America is weirdly manifesting non talented people simply. Imagine being born in the Monarchy – it could happen to everyone and you didn’t need any talent at all to be popular. That’s the similar mechanism.

Cultural Hater: I agree. It’s a different kind of world we live in nowadays. Is that the kind of thought you would like people to have after they watch “Viral Beauty”?

Casey: When people watch this, they will see the ridiculousness of the entertainment industry as a whole. A lot of people told me that this is an important topic, the one we touch in “Viral Beauty”. We wanted people to realize how the bloated fame of these celebrities is both ridiculous and worthless. We chose to go with a comedic form, because it allowed us to add a deeper dimension to it.

So going back to the ending – I think that what people realize after “Viral Beauty” is that this is our life. It’s nothing that you don’t see on a daily basis on Celebrity News. We consume it, it’s normal.

“Our generations is fascinated with being famous. It’s one of the changes that I think we’ve seen over the last decades. Talent used to be important, people needed it to get famous. Nowadays, you don’t need that. All you need is to be hot.”

Cultural Hater: There’s a few Youtubers, who appear in the film and comment Marsha’s rise and fall. How did you get them to work with you? Could you spare some details on the creative process in terms of such collaboration?

Casey: When we originally got the script, there was no Youtubers. We thought it would be all actors. When we got our edit out, we realized that the representation wasn’t strong enough. That’s how we came to the conclusion that real Youtubers will be much better. So we reached out to several people, we got the response. I was surprised that there was interest, because – let’s be honest – this movie doesn’t put them in a good light.

Perez Hilton, one of the mega influencers appearing in “Viral Beauty”, went to NYU Tisch for acting. And David Lam, the director, and I went to the NYU Tisch Graduate Acting Program. He knew that it would be a piece we worked on seriously. We were ecstatic when he showed interest. Our screenwriter, Elizabeth Lam, had also studied each influencer and Youtuber. She studied their channels, the way they speak. So it was all scripted, but crafted to sound like their own words.

Cultural Hater: I found Rick Bravos to be particularly interesting. He was so over-the-top, but at the same time captured the Youtube starlets so well.

Casey: The actor’s Ben Mehl, he’s great. When we started, he was one of these very curated people with an online channel. He was based on some of the influencers we’ve seen. Ben immersed himself in it, he was very expressive and liked the character. In the room, while we were shooting, it was crazy to observe him, but in the cut it worked. This whole community is pretty much “in your face” and he portrayed that.

Cultural Hater: What are your plans for the future? Do you see yourself as an actress or a producer or both again?

Casey: I’m always going to be an actress. I mean, the climate requires you to be a producer too. Nowadays, you can shoot anything with your iPhone…

Cultural Hater: And get famous like the creators of “Tangerine”.

Casey: Exactly! I don’t wanna advertise myself as a producer, but as a female producer there’s more attractiveness in the market. I want to dive into something personal to me and produce again. But I consider myself an actress. I’m an actress (laughs).

Cultural Hater: One last question – I like to ask my guests about their favorite films and music (just for fun, because it’s cool to share a piece of your own personality!). So, are there any particular movies and bands/artists you would call an inspiration?

Casey: Everything inspires me. While I was working on “Viral Beauty”, I listened to a lot of Lana Del Rey, Marina and The Diamonds, Lady Gaga etc. Their music often sounds happy, but once you dig into the lyrics, these tracks are depressing. I watch movies too, I like going to museums. I’m open minded. Everything can be an inspiration you know.

Cultural Hater: It was great to chat with you Casey.

Casey: Thanks! You too, Kajetan!

Watch the trailer of “Viral Beauty” below. The film is available on Amazon Prime.