Landing somewhere between a tribute to “Clerks” and a daring, socially-engaged drama, “Blindspotting” is another peak of the American independent cinema in 2018.

The protagonists of “Blindspotting” are two friends – Miles (Rafael Casal) and Collin (Daveed Diggs). Both work in the same company, grew up together in an Oakland neighborhood and face the similar struggles on a daily basis. The story begins when Collin is three days before his probation time ends (after doing jail time due to a street battery). These three days, however, abound in unusual events.

The directors of buddy comedies rarely find enough courage to give their characters voice in social debates. The common premise of these films confines them within the frames of the protagonists, who live in some sort of a bubble as if any external forces magically touch everybody else but not them. Even “Clerks”, despite its fantastic portrayal of the average people doing average things and living their average life, suffered from a rather skin-deep structure when tackling the perspectives of these very people in the American society. As long as I also consider it a somehow groundbreaking buddy comedy, it wasn’t particularly a milestone in taking a voice in any heated discussion.

Contrary to that majority, Carlos Lopez Estrada’s “Blindspotting” hits the viewer bluntly with a clever commentary, right from the start of the movie.

Its characters seem to be full-time losers – guys, who move cardboard boxes from one place to another and share zero-to-none perspectives. Moreover, Collin, as an ex-convict, is already on the brink of the society, while Miles poses all-gangsta, because that’s his tool of survival.

But soon, these two get entangled in a series of events, which gives the film impetus and drives the deeper meaning to unfold. Most importantly, “Blindspotting” puns the modern racial prejudices that not only exist, but seem to become more cemented than ever. The director uses shortcuts and points out that a black man must carry a gun, whilst the certain neighborhood means worse type of people. Blatantly put as it is in “Blindspotting”, there is an undeniable power in the way Estrada paints Oakland as a metaphor for the whole state of America – racist and unwilling to solve the problems at their foundations. Then, there is the gun, bought by Miles at some point, which clearly signals another flammable point of discussion – the gun law.

Although it might seem like that, Estrada isn’t just throwing ideas in the air. His arguments are solid, while his vision clear. Both Miles and Collin act on their own and not the way the plot wants them to (however the story is “Blindspotting”’s biggest drawback, which I’ll discuss later on). As a consequence, these topics are brought up naturally, without a false tune. 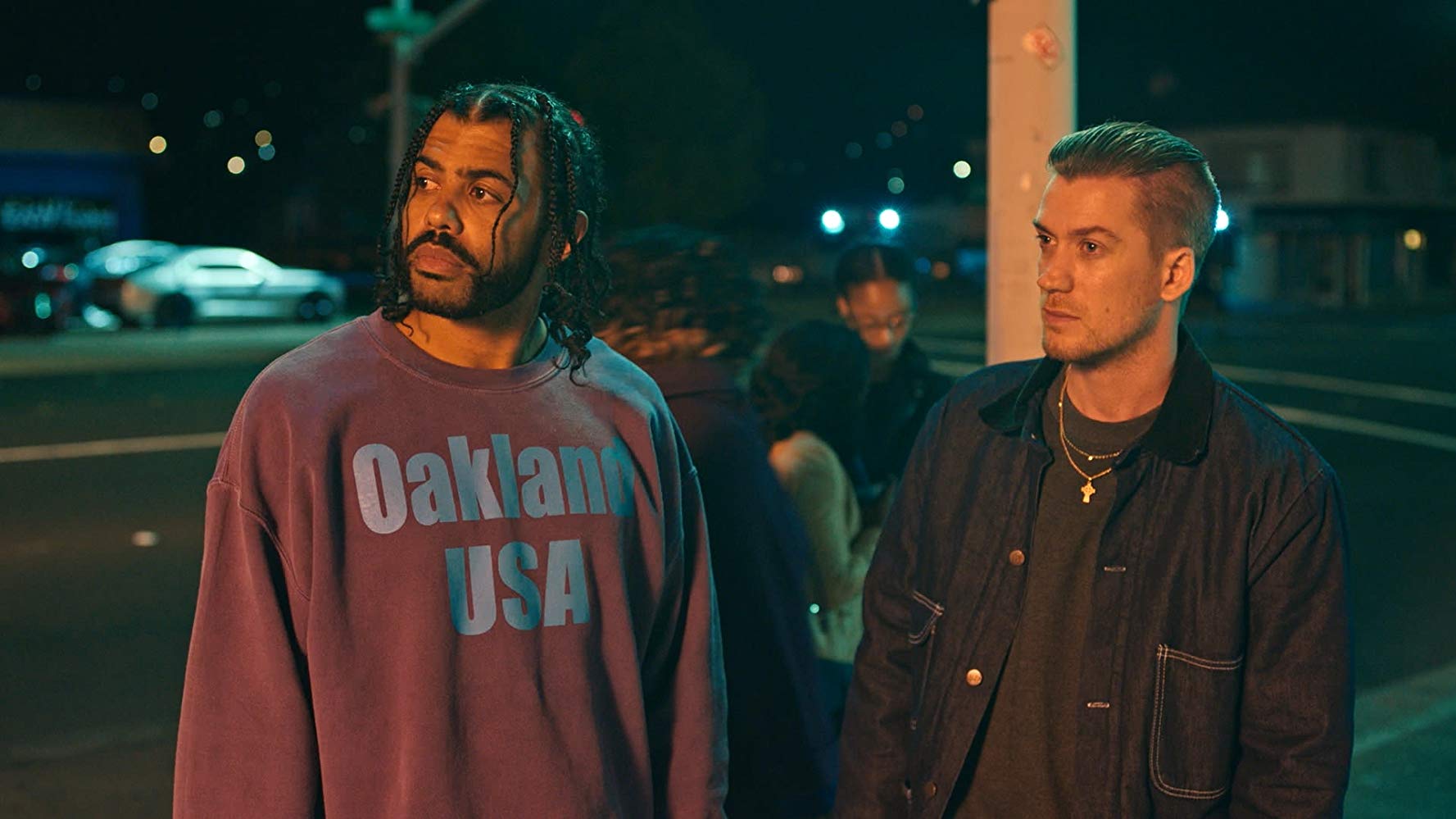 “Blindspotting” hits the jackpot when it comes to its two cast choices too. As two guys from the hood, Rafael Casal and David Diggs share an incredible amount of chemistry. They are naturals, proving themselves to be pure diamonds of the indie film scene. Miles and Collin can pull off a ridiculous conversation about an organic kale juice, but also convince you they wish things were different and they act out only to cover up their fears.

There is also one particular feature of Collin that I grew fond of. Whenever a challenging topic or memory comes round, Collin speaks his soul out by… rapping. Call it naive (and even a tiny tidbit racist), but it works flawlessly in the greater scheme of things. Because once “Blindspotting” escalates, a man unwilling to open up finds this peculiar way of finding his voice. The powerful symbolism of rapping – the music of the rebellious ones – adds just another layer to Collin’s character too. It also brings to my mind another 2018 flick, “Sorry To Bother You”, where an exactly reverse situation takes place in the middle of the film (the main character, who is black, is asked by a bunch of white dudes to rap).

Notwithstanding the wit and sharp direction, Estrada did not keep off a few minor slip-ups. “Blindspotting” suffers from a whimsical plot – one that pushes its protagonists forward, but uses too convenient (or awkward) ways to connect the dots. Like the very ending of the film. Sure, it brings Diggs’ character to the pivotal moment of the arch and gives a closure to one of the subplots. However, it also paints a false image of Oakland as a minute town of a hundred citizens, where everybody knows each other.

Alluring in its impeccable form and daring to scream louder than most titles in its genre, “Blindspotting” hits the spot. You might want to give this one a shot, whenever you get the chance – it’s this kind of independent feature that needs a few years to become a cult.